A boolean logic rules engine was the first project I did for Neo4j before I joined the company some 5 years ago. I was working for some start-up at the time but took a week off to play consultant. I had never built a rules engine before, but as far as I know ignorance has never stopped anyone from trying. Neo4j shipped me to the client site, and put me in a room with a projector and a white board where I live coded with an audience of developers staring at me, analyzing every keystroke and cringing at every typo and failed unit test. I forgot what sleep was, but managed to figure it out and I lost all sense of fear after that experience.

The data model chained together fact nodes with criss crossing relationships each chain containing the same path id property we followed until reaching an end node which triggered a rule. There were a few complications along the way and more complexity near the end for ordering and partial matches. The traversal ended up being some 40 lines of the craziest Gremlin code I ever wrote, but it worked. After the proof of concept, the project was rewritten using the Neo4j Java API because at the time only a handful of people could look at a 40 line Gremlin script and not shudder in horror. I think we’re up to two handfuls now.

Over the years a few projects have come up which needed rules that had to be evaluated. One example is a shopping cart that could trigger a discount if a set of items was purchased. Another is a job seeker with a set of skills that could match a job posting. One more could be a user with a set of tags that prompted an advertisement to be displayed.

To see if a user triggers a rule, we would start by collecting their attributes and then from each attribute traversing in and out the AND and OR nodes looking backwards and checking if we had (or didn’t have for NOTs) the attributes required. All relationships leading to the AND nodes would have be valid, but just one of the relationships leading to the OR nodes. This is a valid way of doing it, but today I’m going to show you an alternative.

In order to find if a user triggers a rule, we’ll create a stored procedure that finds the user, gets their attributes and for each attribute tries to find a set of rules:

The magic happens in the findRules method. For each attribute node we traverse out the IN_PATH relationship and get the “path” property of the relationship. We split it into an array of strings each holding an attribute id. We also split the “path” property into a character array using just the ANDs (“&”) and NOTs (“!”). For each path we check to see if we are missing a needed attribute or if we have an attribute we should not have. If either one of those is true we fail the path we are on and try the next.

This makes our logic pretty easy to follow and we don’t have to worry about chasing ANDs, ORs or NOTs depending on which nodes we land on along the way. But how do we build this graph in the first place you may ask?

We’ll create another stored procedure for this called rules.create that takes a rule id and formula as input:

This next part is where the magic happens. We take our formula and create a Boolean Expression. In this boolean expression we are going to create a Truth Table and use the Quine McCluskey algorithm to find the prime implicants and Petrick’s Method to find all minimum sum-of-products solutions which become our “Path” nodes.

Do you remember taking “Digital Logic” in college and thinking… I’m never going to use this stuff… yeah. Ok, now for each path we’ll check to see if another rule already created this path and if not we’ll make one. This will let us trigger many rules if they share a common path.

Lastly we’ll connect our path node to the rule node we created earlier:

Alright. Let’s create some sample data and try it. We will create two rules:

…and create a few sample users and connect them to some attributes like so: 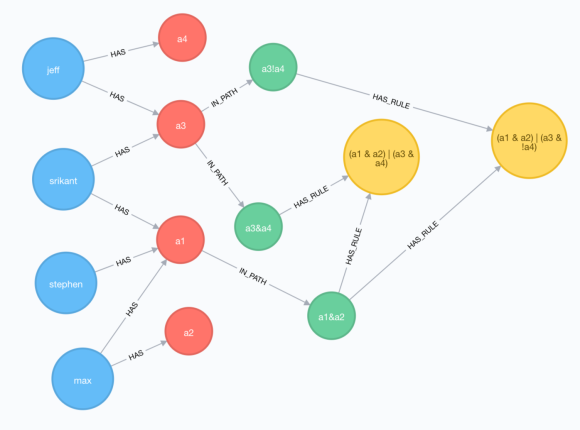 For example user “max” has attributes “a1” and “a2”. So when we run our match procedure:

We will return both rules.

In a large production deployment you may not want to store the user to attribute relationships or they may be transient like items in a temporary shopping cart for example. In this case you’ll want to pass in the attributes directly and call it this way:

I’ll spare you the details but the complete source code is on github as always…and now you know one way to build a rules engine in Neo4j.

Update: If you have a path that is a single NOT or only NOTs it won’t work as shown. The way to deal with it is to have a global “always true” node in these cases and hang any single NOT or only NOT paths off this node that all users would have. This can be handled when the rule is being created or it handle during the path creation.

3 thoughts on “Building a Boolean Logic Rules Engine in Neo4j”