I’ve had “Networks, Crowds, and Markets: Reasoning About a Highly Connected World” by David Easley and Jon Kleinberg on my bookshelf for a few months now, and a conversation with a client reminded me that I hadn’t finished reading it (barely started really). It is available from Cambridge University Press, but also on the web and in PDF format.
END_OF_DOCUMENT_TOKEN_TO_BE_REPLACED

Max Flow with Gremlin and Transactions 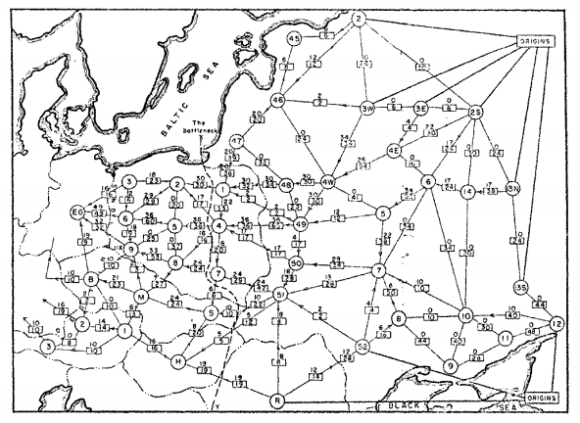 The maximum flow problem was formulated by T.E. Harris as follows:

Consider a rail network connecting two cities by way of a number of intermediate cities, where each link of the network has a number assigned to it representing its capacity. Assuming a steady state condition, and a maximal flow from one given city to the other.

Back in the mid 1950s the US Military had an interest in finding out how much capacity the Soviet railway network had to move cargo from the Western Soviet Union to Eastern Europe. This lead to the Maximum Flow problem and the Ford–Fulkerson algorithm to solve it.
END_OF_DOCUMENT_TOKEN_TO_BE_REPLACED